I’m not a writer, nor do I pretend to be. I am a talker; that’s just what I do. (At least that’s what my wife tells me..) well, I think it depends on the occasion! Most of the time though, I have to admit, I can see the back of my thoughts as they leave my mouth. In a group setting, when others are talking, if I don’t try hard I’ll find myself thinking about what I’m gonna say after the person shuts up instead of listening to what they have to say. Bad, very bad habits that I know I need to work on!

The Lord’s blessed my life with many friends that soon have become family. Most of them I met on a mission trip and most of the time, I was their interpreter. They all know what it’s like being in a country where they don’t know the language; they know that feeling. If they like talking like I do, they’ll tell you that it’s no fun when you can’t share your thoughts and feelings without relying on an interpreter or google translate.

Personally, I have been in very few situations where I experienced a language barrier. At one point while serving in Kenya, I was mistaken for one of the locals. People would approach me and start speaking Swahili to me. All I knew to say back was “poa poa,” which means cool in Swahili. Most of the time that conversation ended by me being laughed at. One other time, I was having a hard time remembering our bus driver’s name there and for some reason, I thought that it was “Jumbo,” which means hello. So for days I went around calling him that whenever he was around. He would act so confused because I was constantly saying “hello” to him.  Another time, I was traveling to the DR by myself with no cellphone and ran into some trouble. I needed help communicating after missing the bus in Santo Domingo around 8:00 pm. The next available bus time wasn’t until the next morning. I needed to find a place to spend the night but I was helpless and I remember saying to myself, “this sucks! ” and waited for a miracle. Fortunately enough, I met another Haitian at the bus station that night who lives in the DR. He was kind enough to show compassion on this non-spanish speaking man and gave me a place to stay that night.

Last year, serving with praying pelican missions I was put in a situation where I had to pretend that I don’t speak Creole. Well, that’s a long story that we can talk about another time, but that same week I visited a deaf school. I wanted to communicate with them so badly, but I couldn’t; I don’t know sign language. I didn’t have an interpreter either, no one, no nothing.

I forgot about that feeling until about two weeks ago when my wife and I went Mississippi School for the deaf (MSD) to attend a basketball game. In the beginning, the gym sounded a lot quieter than your average gym, but the truth of the fact is people were talking the whole time! Caroline and I ended up sitting in front of a group of little girls, one of them we had met on a previous visit. I turned around to greet them, and with my big mouth said, “hey, how are you guys doing?”
Two other girls sitting next to Caroline saw what I did. One signed to the other and later I found out what they said, “they don’t sign.” Then they left to find another seat. That was sad!

All throughout the game I was amazed. Not only was I awestruck at the sovereignty of God choosing who He gives what to, but also by the opportunity that He offered me to see all the deaf students through His eyes. They are, just like me, His beloved. He will not allow anyone to push or oppress them. He will give men in exchange for them, sell the whole world, and even trade the creation! That’s how much God loves them; that’s how much He loves me and He loves you!

While being able to talk and communicate remains my comfort zone, my inability to sign that day humbled and stretched me. I couldn’t help at the end but to praise God for being multilingual. He does not have boundaries. Where we stop to exist is where He continues to flourish! When we do not understand, we know that He does! When we are not capable, we can rest assure that He is!

Some will say “I don’t want to go on a mission trip, for example, in so and so country because I do not speak so and so languge”. Well, just like many of my missionary friends, I will say that our God does great things despite language barriers. He still reveals himself. He still changes hearts and life styles. He unifies the Church. Most of all He builds a bigger heaven on this earth for the Glory of His Name. 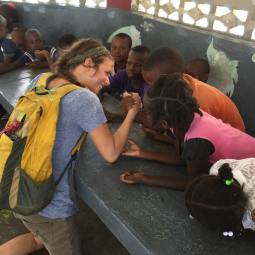 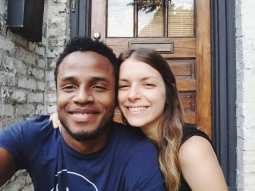